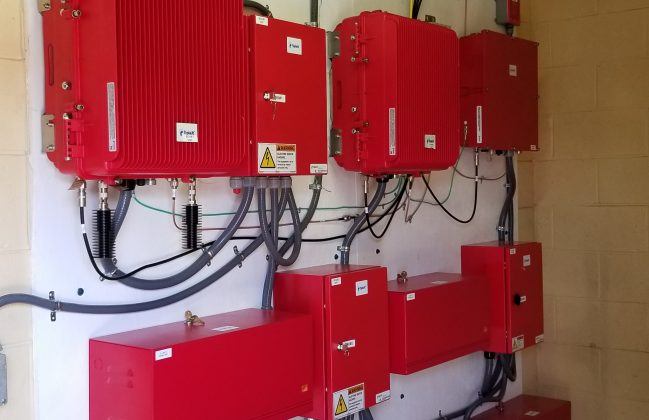 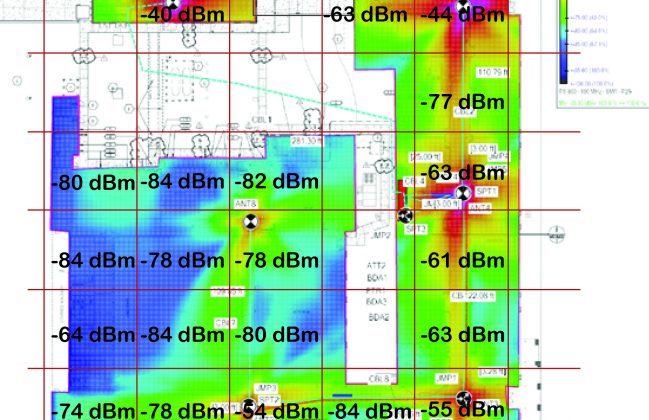 The project’s General Contractor contacted us to benchmark the existing public safety signals at a middle school in South Carolina. Our team contacted local emergency responders to verify which frequency bands and channels (VHF, UHF, P25) were actively used. As work began on the project, we met with a local firefighter and used his radio and our spectrum analyzer, which samples the radio frequency spectrum and displays the signal levels for certain frequency bands. With this, we were able to generate a qualitative and quantitative signal analysis that showed that we had a usable signal outside of the building and borderline acceptable coverage inside the building. The middle school was renovating and had a large section of windows not installed. The windows were planned to be replaced with a Low-E glass, which would drop the signal quality below acceptable levels.

The General Contractor reviewed our findings and agreed that a system was required to comply with IFC 510. We designed a system that would incorporate all the public safety channels (VHF, UHF, P25) and process them through one Distributed Antenna System (DAS) throughout the facility. The DAS looks for signals generated in the building on the public safety channels and only transmits when it detects a signal and does the same from the rooftop antennas that are looking for a signal from the local towers.

One of the key challenges in designing a system as such is to isolate the DAS from the rooftop antennas so that they do not interfere with each other. If they were able to detect signals from one another, a feedback loop that would effectively jam all radio communication on those channels for miles in the surrounding area. In order to prevent this, the antenna positions and power levels were carefully calibrated all the way from design through installation and commissioning.

Completion of this project and our involvement with RF design, construction, and engineering services ensured safety for students, school administration, first responders, and the community at large.