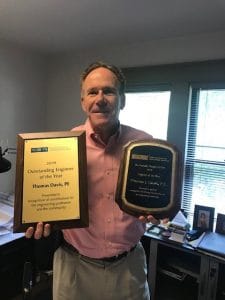 Accepting the award, Davis expressed his thanks and challenged the young engineers in the audience to, “get involved, be engaged, work hard, do what you say you are going to do, and treat people right.”

Davis was recognized for his professional level of integrity and outstanding character. He was also selected due to his contributions to the engineering profession and the community. Earlier this year, Davis was honored by the Nashville chapter of TSPE, which qualified him for this award.

Davis has more than 36 years of experience as a professional engineer. He has been a key leader in managing large, multi-disciplined project throughout the United States. Examples of his work include privatization projects on dozens of military installations, educational and campus projects, healthcare facilities, and mixed-use developments. He graduated from the University of Kentucky, and now manages engineering staff from Tennessee, Alabama and Georgia.